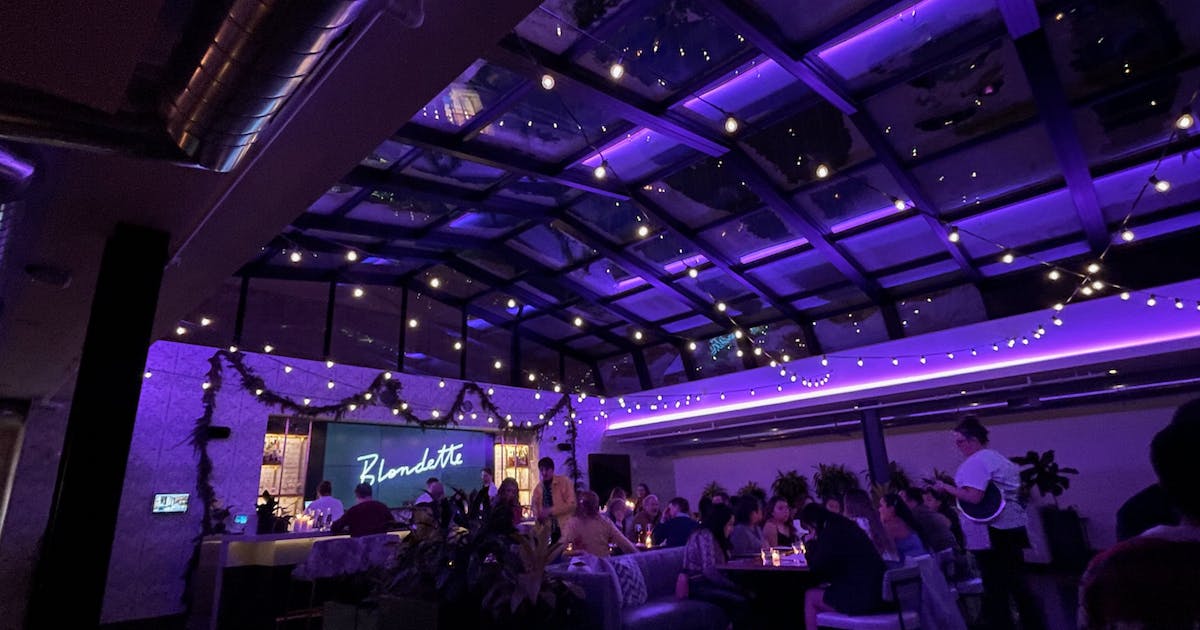 Ever since the Art Deco beauty of the Rand Tower in downtown Minneapolis was restored and revealed as a hotel and destination dining space, the fifth-floor atrium has been waiting. While the downstairs restaurant space first served as Whiskey and Soda, the gorgeous upper-level space with two bars, a glass-topped dining room and an outdoor patio lay largely vacant. The hotel continued to assure that something was coming, and it finally did: Chef Daniel del Prado and his team moved in, brought neon lighting and christened the room Blondette.

But Blondette is the star of the show, melding influences from del Prado’s time living in the Pacific Northwest and his classical French culinary training.

The vibe: Prince would have dug this place — everything is bathed in an ’80s-reminiscent lavender cast. (It is not the place for arty food pictures.) The light reflects out into the golden lit buildings surrounding the space, and it gives the snow piled on the glass ceiling a cerulean cast. Green plants dot the corners of the room, and a giant screen behind the bar proclaims Blondette. Several of the cozy tables were populated by friend groups, many of them women clutching glassware with stems 2 or 3 inches longer than the average wine glass.

The food: The menu is hearty with generous portions, built for the indulgence of the season. The cuisine is described as French by way of the Pacific Northwest, which means dishes like a spot prawn crudo adrift in a rich sauce of uni butter zipped up by chili crisp ($17). Entrees include a massive duck breast ($37), cooked until the skin is crispy but the interior retains a blush, served a l’orange and saucy. A side of pommes Anna ($9) is served under a melted Mimolette cheese crust and atop a pool of Espelette-spiced sauce. Another entree where del Prado takes creative license is a chicken roulade, made from ground chicken and wrapped in Swiss chard ($27). Our server explained the process as we ordered, indicating that it wasn’t a preparation expected by most diners. Since the bitter green isn’t mentioned, we appreciated the heads up.

Getting there: The hotel offers complimentary valet parking, but there are also plenty of open meters on the block. (Joy Summers)

Arts + Rec is a choose-your-party kind of spot that’s unlike anything else in Uptown. Enter through Seven Points Mall and you’ll wind up in a room styled like a vintage record shop that kicks off an immersive mini-golf course ($12). Or, enter through the street-level glass doors and walk into a bar and restaurant. In the middle, there’s a stage and a private, rentable bar.

Like the space, the menu is built to lend itself to any sort of night. Drinking with friends? Get Dorito-crusted cheese curds ($14), ham and pickle croquettes ($12) or a basket of togarashi-topped fries ($9). Plant-based eaters will be pleased with the roasted beet salad ($12) and a Maxwell dog ($10) made with a Beyond hot link. Those on a first date can linger over heartier entrees like beef short ribs ($28) or crawfish pasta ($21). And the bar is throwing down some refreshing drinks like the Minnesotan-baiting Sauna Society ($13), made with Gamle Ode aquavit and garnished with a pickle. (Joy Summers)

There’s an inviting smell of grease that lingers outside Asia Mall, the modern-ish shopping center teeming with restaurants and a supermarket stocked with more brands of instant ramen than you need. It may come from Hometaste, the restaurant started by the original owners of Hong Kong Noodle, where ducks and chicken are quartered and ceremoniously hung at the window, like a Christmas display; or from Dosirak, which churns happy meals of warming tofu stews and bibimbaps in metal bowls and stone pots; there’s a hot pot restaurant, too, another restaurant of Pho Mai, and beside it, a doughnut shop that churns boxes of Instagram-worthy mochi doughnuts by the minute. There are plenty of reasons to get overwhelmed here, so plan carefully and go early. (Jon Cheng)

12160 Technology Drive, Eden Prairie, asiamallmn.com; the mall is still in its soft-opening phase.

Clancey’s Meats & Fish opened Nov. 1 in the former Grand Cafe (and Grand Bakery, and the Bakery on Grand), exactly 19 years after owner Kristin Tombers first set down roots 3 miles away. Known for its farm-sourced meats and an iconic roast beef sandwich, the new space gives it room to spread out, with plenty of seating and an expanded gourmet grocery and prepared foods selection.

The space has been gutted from its days as a French restaurant. But the high ceilings and original wood floors still give off flashes of rustic-glamorous charm befitting the building’s long history in hospitality.

Dinner service hasn’t begun yet, but fans of the hallmark meat-and-condiment-packed sandwiches (on Patisserie 46 baguette, $16) will be pleased that the menu is intact. Add to that a buzzworthy breakfast sandwich ($9): a Japanese milk bun piled with a sky-high egg soufflé, sautéed Anaheim peppers and your choice of ham or bacon. Order one of those and a cup of coffee and just try not to be tempted by the caramel pecan rolls ($4) on the counter. (Sharyn Jackson)

Chef Vincent Francoual is back in public, after the former Vincent, A Restaurant proprietor took a detour into private cheffing at a country club. In partnership with Restore Restaurant Holdings (EaTo) and Erik Forsberg (Dan Kelly’s, Devil’s Advocate), Francoual has launched what’s intended to be the first in a portfolio of restaurants that will allow his expertise for, and love of, French cooking to shine.

Chloe by Vincent opens Dec. 14, but we got a sneak preview of the casual French bistro holding court in the historic Thresher Square, which is occupied by the Canopy by Hilton hotel.

Despite the limitations of being a hotel restaurant, Francoual managed to bring some pieces of home to the restaurant’s look and feel. Upon entry, notice a mural wall with photos from his small hometown in southwest France. The somewhat raw industrial space is made cozy with jewel-toned diner booths, rustic ersatz-Limoges dishware, a luxurious dark wood bar in the middle of everything, and the turquoise glow of the restaurant’s name hand-sketched by its namesake, Francoual’s 9-year-old daughter.

The menu has French fare’s greatest hits: Breton crepes made with buckwheat flour and stuffed with sautéed mushrooms, shaved ham and a runny egg, or sweet fillings for dessert (they’re gluten-free). Tarte flambée, a kind of Alsatian pizza with cream, onions and bacon, is the bar snack we didn’t know we were missing. We look forward to trying some heartier dishes, such as cassoulet and boeuf bourguignon, when the place officially opens. Cocktails go all in on flavor and fragrance, such as a concoction of gin and rosemary syrup, and a desserty Cognac Old Fashioned with amaretto and vanilla. (Prices weren’t available at the time of publishing.)

Two holdovers from Vincent A Restaurant are making a return: the scallops with orange sauce and, of course, the famed Vincent burger, which is a Juicy Lucy gone haute. Some staff has stuck with Francoual since the acclaimed former restaurant’s days as well, both chefs and servers. If you were missing Francoual’s Nicollet Mall heyday, you’ll find a relaxed new version of it here. (S.J.)

There’s always risk in taking over a much-beloved restaurant, as the Misfits Hospitality Collective did with Dangerfield’s in Shakopee. But the suburban restaurant group, hand-picked by retiring owner Gus Khwice, has revamped the menu and added polish, whimsy and a tiki bar while maintaining the classic charm of this gem on the banks of the Minnesota River. Many supper club standards are there — wedge salad, fondue, shrimp cocktail, steaks and prime rib; but alas, no popovers — along with pastas, sandwiches and other crowd-pleasers. (Price check: starters $14-$18, soups and salads $9-$14, handhelds $12-$18, entrees $18-$38.) A leather-bound drink menu holds a treasure trove of spirits and requisite ice cream drinks; the service is exceptional.

Downstairs, the Rum Row Tiki Bar feels like another realm, with wooden accents and a giant wall of rum contrasting the elegance upstairs. The menu offers small bites like jerk-seasoned chicken skewers ($14) and papas rellenas, mashed potatoes wrapped around picadillo and fried until the interior reaches volcanic levels ($12). The cocktails are split between festive tiki drinks or boat drinks garnished with paper umbrellas and other accoutrements ($10), pre-Prohibition classics ($10-$12), and drinks built to showcase the bar’s extensive rum collection. (Nicole Hvidsten)

With more than 100 TVs, a 360-degree viewing room, the ability to personalize audio tableside and a supersized roster of sports programming, this sprawling bar and restaurant in downtown Minneapolis leans into what it is: a mecca for sports fans. Yes, there’s traditional sports-bar fare — nachos, wings, burgers and tacos ($17-$25) — but you’ll also find mac and cheese topped with lobster and shrimp ($28), an ahi tuna tower ($15), hummus ($13), poke bowl ($19), prime rib dip ($24), salads ($18-$25) and fried chicken strips (regular or Nashville hot) served with a standout sweet cornbread pancake ($19). In addition to beer and wine, an inventive and potent cocktail list includes the Party Starter (a double dose of hibiscus margarita with a Red Bull Red Edition, $23) and the Walk of Shame (grapefruit vodka with lemon, cucumber, simple syrup and basil). And for those who like to root for the home team, the rapidly growing chain was co-founded by Minneapolis resident Tom Ryan. There are now seven locations nationwide, with two more on deck. (Nicole Hvidsten)