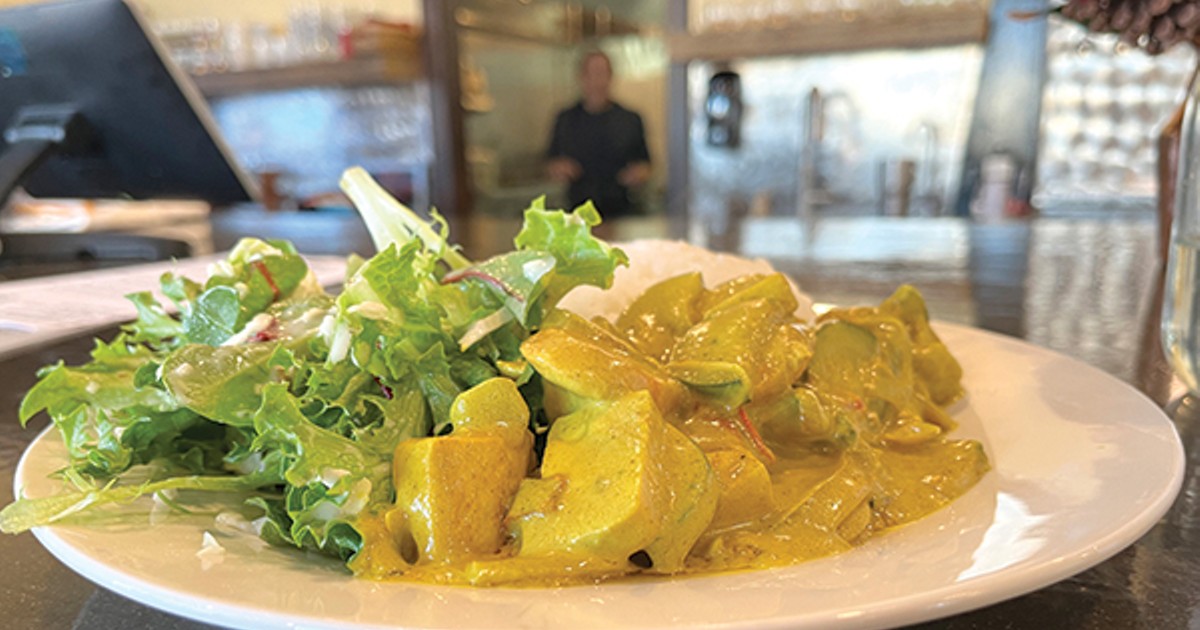 The Himalayan mountain range is made up of three parallel ranges that cover approximately 1,500 miles, passing through the nations of India, Pakistan, Afghanistan, China, Bhutan and Nepal. The range is bordered to the north by the Tibetan Plateau. It’s the highest mountain range on Earth and is often referred to as the “roof of the world.” Mount Everest is not only the highest peak in the Himalayas but the highest peak on the planet at 29,029 feet.

Himalayan food encompasses the cuisines of several countries and regions. Nepali cuisine is actually a variety of cuisines related to Nepal’s cultural diversity and geography. Depending on the region, ingredients can include anything from lentils to potatoes to fermented vegetables to yak meat and cheese to persimmons. Some of the most common ingredients include rice, lentils, potatoes and other vegetables, cumin, coriander, chilies, peppers, garlic and yogurt or dahi.

Momos are Nepal’s version of dumplings and typically contain steamed vegetables and minced meat. Originally from Tibet, traditionally filled with minced meat, potatoes and leeks, momos have become a delicacy in Nepal. Nowadays, different types of fillings abound. Thukpa is a Nepali and Tibetan noodle soup.

Both momos and thukpa are served here in Central Oregon at High Camp Taphouse in Sisters. What started as a popular food cart, “Himalayan Bites,” has evolved into High Camp. Owners Pema and Nurbu Sherpa have spent decades operating restaurants and lodges in both Nepal and the U.S. and are longtime Central Oregon residents.

Their new brick-and-mortar, open since June, is all about Himalayan cuisine, hospitality and local craft beers and ciders. The large red building with a peaked roof, on the left of Highway 20 beside the 76 station as you drive into Sisters, is home to High Camp Taphouse. There’s a spacious outdoor area, which in the warmer months is home to revolving food carts, but right now it’s the indoor area that is welcoming one and all to enjoy Nepalese cuisine and hospitality. I dropped in for lunch on a recent cold winter day and was warmed by the flavors of the high country of the Himalayas.

High Camp’s handmade dumplings (momo) are stuffed with ground beef, ground pork, cabbage, onion, garlic and ginger and are served with sauce and salad. The thukpa (bone broth noodle soup) includes noodles in either bone broth or vegetable broth with the choice of beef, chicken or vegetables topped with a boiled egg. Very warming on a frozen winter day.

I also ordered the Sabzi Bhat (coconut curry). Sabzi is an Indian term for vegetable dish and Bhat means steamed rice. I was served a large plate of vegetables cooked in traditional Nepali style with coconut milk and Himalayan spices alongside a mound of perfectly cooked jasmine rice and a large green salad. I asked for hot peppers on the side and received a small container of a thick chili paste, excellent mixed into the veggies and rice. The entire dish was warming and delicious with just the right amount of spicy heat.

While there’s a large rotating selection of Pacific Northwest beers and ciders on tap (it is a taphouse), I opted for High Camp’s Masala Chai. Their version of the black tea made with cinnamon, cardamom, clove, sugar and steamed milk was a perfect balance of spicy and sweet and maybe the best chai I’ve had locally. A nearby customer was enjoying the Mango Lasse drink made of yogurt, mango, water and other spices.

I was wishing I could eat more but instead noted the reactions of other lunch-goers who were having Himalayan Fries (with tomato sauce and fresh herbs served with a cheese dipping sauce), the Chau Chau udon noodle dish and the Shapta Beef with peppers, tomatoes and onions stir fried Tibetan style with house made sauces and spices.

A kid’s menu offers creamy udon noodles, rice and peas and chicken strips. And for dessert, choose from a variety of Ruby Jewel ice cream sandwiches from Portland.

There is a nice long bar along with plenty of tables and chairs for groups and a sitting area on one side of the large room with comfy sofas and chairs. There is also a corner stage for live music and a few pieces of beautiful artwork and paintings. The only thing missing was some sort of music; personally I prefer some type of music or ambient sound versus silence in a restaurant; I think it adds tremendously to the atmosphere. In a place such as High Camp, it wouldn’t need to be anything raucous but some kind of mood music would be a nice addition to warm up the vibe.

A portion of High Camp’s profits go to help marginalized populations in Nepal. So far the Sherpas have helped run dental camps in remote areas and are currently helping fund a groundbreaking program to educate and provide income-generating opportunities for members of the Musurey community in southeastern Nepal.

If you’d like to learn how to make Tibetan momo dumplings at home, High Camp is offering a momo cooking class on Jan. 15 from 1 to 4 p.m. at the taphouse. The class includes ingredients, hands-on teaching and a beverage for $65. Call 541-904-4694 to reserve your spot.