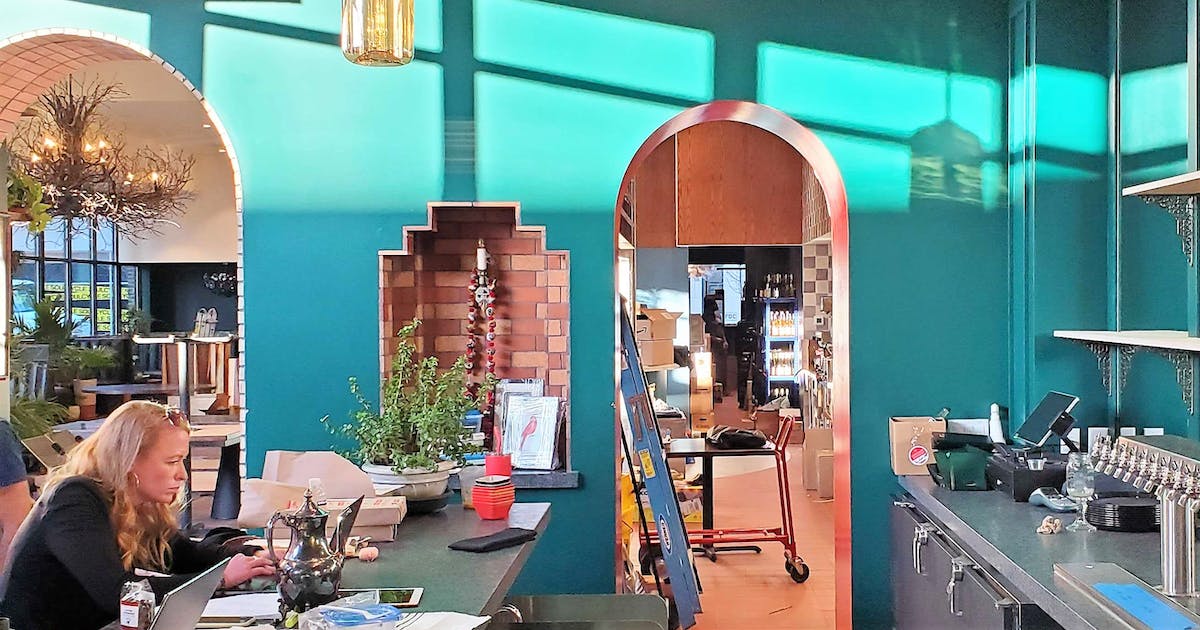 On one of his many trips down to New Orleans, Tommy Begnaud did what many visitors do: He dined at the Commander’s Palace.

To get to his table in the courtyard, he was escorted through the kitchen, of all places, and every staffer he passed greeted him by name. Begnaud got a peek behind the curtain of a world-famous restaurant, and even in the room where the sausage literally gets made, he found himself being treated like an important guest. That walk struck him like a bolt of lightning.

When Mr. Paul’s Supper Club opens Dec. 3, one small portion of the sprawling, 9,500-square-foot restaurant will give guests the feel that it’s an extension of the kitchen; it even has the same no-frills orange-brown floor tiles, despite the rest of the space practically overflowing with lush and opulent accents of chandeliers, feathers and playful crawfish wallpaper. “You almost feel like you’re someplace you shouldn’t be,” Begnaud said.

That juxtaposition of finery and grit — and where hospitality reigns supreme — is New Orleans in a nutshell. And it is one of the many atmospheric touches that will transport guests at Mr. Paul’s clear to the other end of the Mississippi River. The space in the new Nolan Mains apartment complex was designed by Aaron Wittkamper of Wittkamper Studio.

“We want it to feel like, as you walk in, you’re in New Orleans,” Begnaud said. The menu is only a small part of that. “New Orleans is more of the spirit, the vibrancy, the color, the pattern, the texture, than it is about the food.”

That’s not to say Cajun and Creole cuisine, as well as New Orleans’ rich cocktail history, takes a back seat to the décor. But Begnaud is committing to the restaurant’s Midwest surroundings by merging jambalaya and étouffée with supper club classics like steaks, chops, stroganoff and relish trays.

To Begnaud, whose Minnesota childhood was heavily influenced by annual summer visits to Louisiana to see his grandfather Paul Begnaud (the Mr. Paul of the restaurant’s name), the culinary traditions of New Orleans and the Upper Midwest go hand in hand.

Begnaud was the executive chef at Butcher and the Boar in downtown Minneapolis until it closed last year, and the idea for Mr. Paul’s Supper Club began germinating about two weeks after he lost his job. “The communal dining aspect is what drew me to really appreciate Butcher,” he said. “We’ve only got five two-tops in the restaurant and that’s intentional. There’s something about that communal aspect that always kind of drove me back to Louisiana and my family get-togethers.”

At the center of those get-togethers was his Grandpa Paul, who could casually cook up jambalaya to serve 300.

An interior designer, art collector, drapery designer and even a papal vestment maker, according to family lore, Paul Begnaud’s spirit — as well as actual pieces of art from his whimsical and New Orleans-artist-heavy collection — is everywhere in the new restaurant. Presiding over an adjacent sandwich shop, Mr. Paul’s Po’boys and Jams, are paintings ripped from an old Barnum & Bailey’s circus tent that Paul had purchased. By next spring, a market with cocktail elixirs and spices will become part of the brand. It, too, is inspired by Paul, who always seemed to have goods for sale in his trunk.

“How do we do New Orleans in Minnesota so it’s not a caricature? This is not a concept restaurant. This is Tommy’s family heritage coming to life,” said co-owner and cocktail director Nick Kosevich, who is known for his high-energy cocktail programs with Bittercube and Can Can Wonderland, and is most recently associated with Drinks Apothecary and Earl Giles Bottling Co.

In the grand and sweeping main bar, and a smaller bar at the back, Kosevich’s menu will stick to New Orleans classics done with his signature twists. The house specialty is the Sazerac, made withrye, absinthe and Peychaud’s bitters and a spritz of Kosevich’s “Miracle Cocktail Enhancer.” “We want to sell more Sazeracs in this building than anywhere outside New Orleans,” he said.

Early next year, look for Balloon Emporium pop-ups in the sandwich shop space. The intimate tasting dinners with Kosevich’s experimental cocktail pairings will have such one-of-a-kind libations (think: helium-enriched drinks).

“It’s a journey to me, something I’ve been trying to do my whole career,” he said.

“The authenticity of New Orleans is what we’re going for,” Begnaud said. “Food is such an important part of Cajun culture. At the end of the day, it’s all about a smile and a hug and a laugh, and I think we could all use that after the last couple of years.”